Living Out Our Vision

We are all so very proud of Rayaan and Libby who were model pupils during their time at St Lawrence and have clearly continued to be model pupils at Broughton High School, where they are now Head Boy and Head Girl. Another shining example of how our pupils live out or vision. Our love and congratulations to them both. 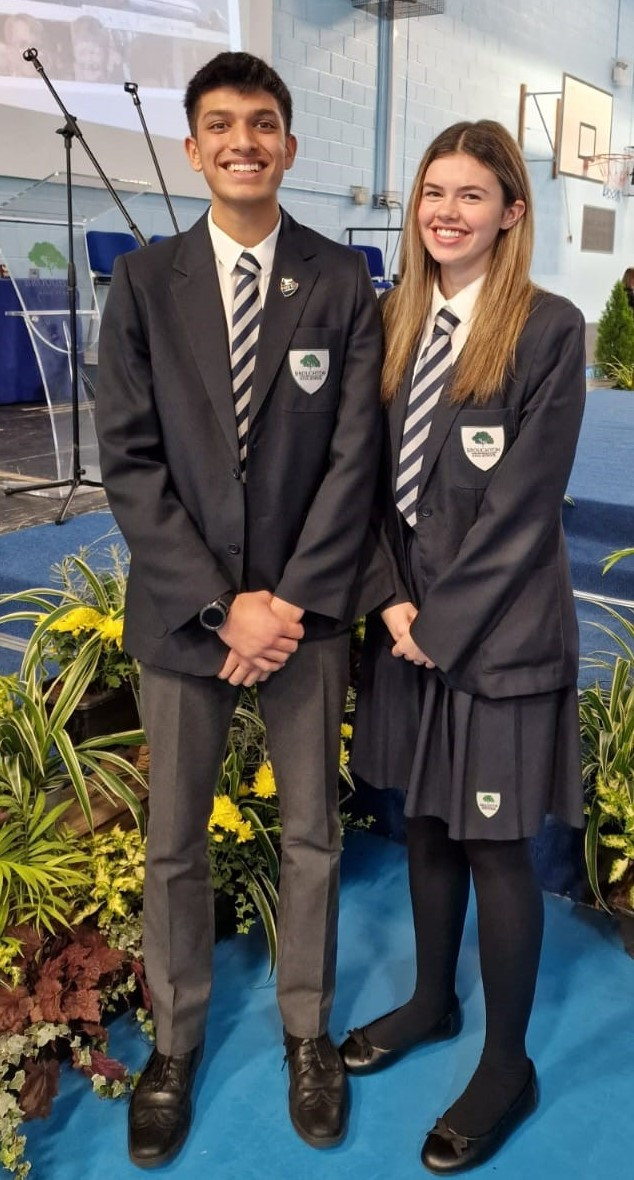 Donation to the Foxton Centre

I am Eesha and I am the current school Charity Rep. On Wednesday, I visited The Foxton Centre and donated the money raised in my bake sale held before summer. In total, we raised £121 for this charity. I met Jeff Marsh; the Chief Executive of The Foxton Centre and he was delighted with this gesture. I would like to thank everybody who contributed to this Bake Sale and everyone that bought some tasty treats. I would also like to thank our school for allowing me to hold the sale especially on the day of the School Production! The money we all raised truly came down to a great team effort! The donation is going towards refurbishing the basement of the Central Methodist Church in Preston city centre which is opening in 6 weeks. This will provide a day centre for the homeless, including warm food, clothes, and medical services.
Thank you! 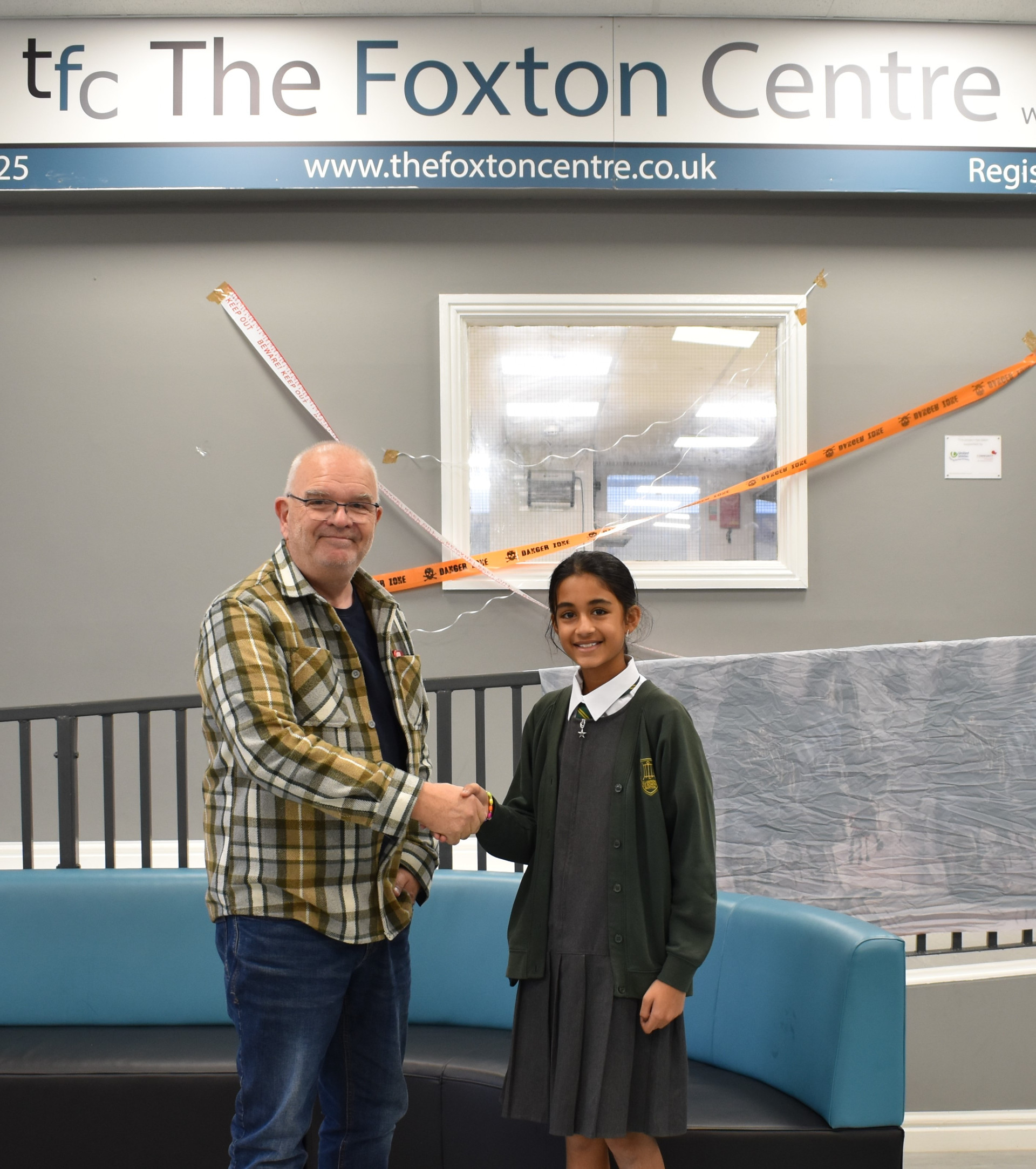 On 4th November we had a very special whole school assembly. Three girls from Year 5 led the assembly and delivered a powerpoint of their own creation to teach us all a little more about Diwali. They showed us a video explaining the story of Rama and Sita and captured our imaginations with a video of traditional Hindu dancing. We are so proud of how confident the presenters were and how well they answered questions from their audience!

Eesha had planned and written the assembly, involved her friends and stood confidently in front of the whole school to deliver it - what a fantastic achievement! Her presentation is included in the files at the bottom of the page. 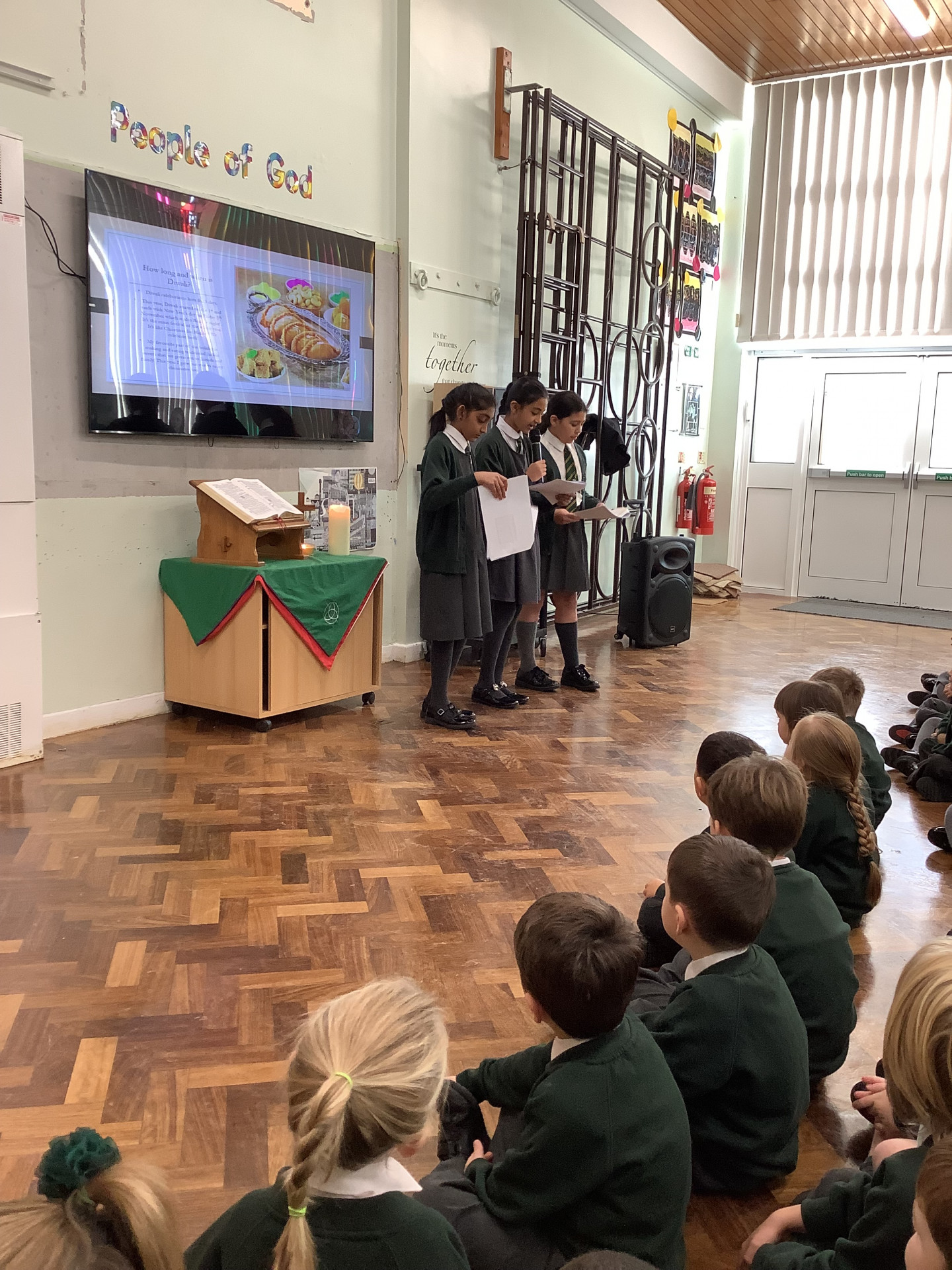 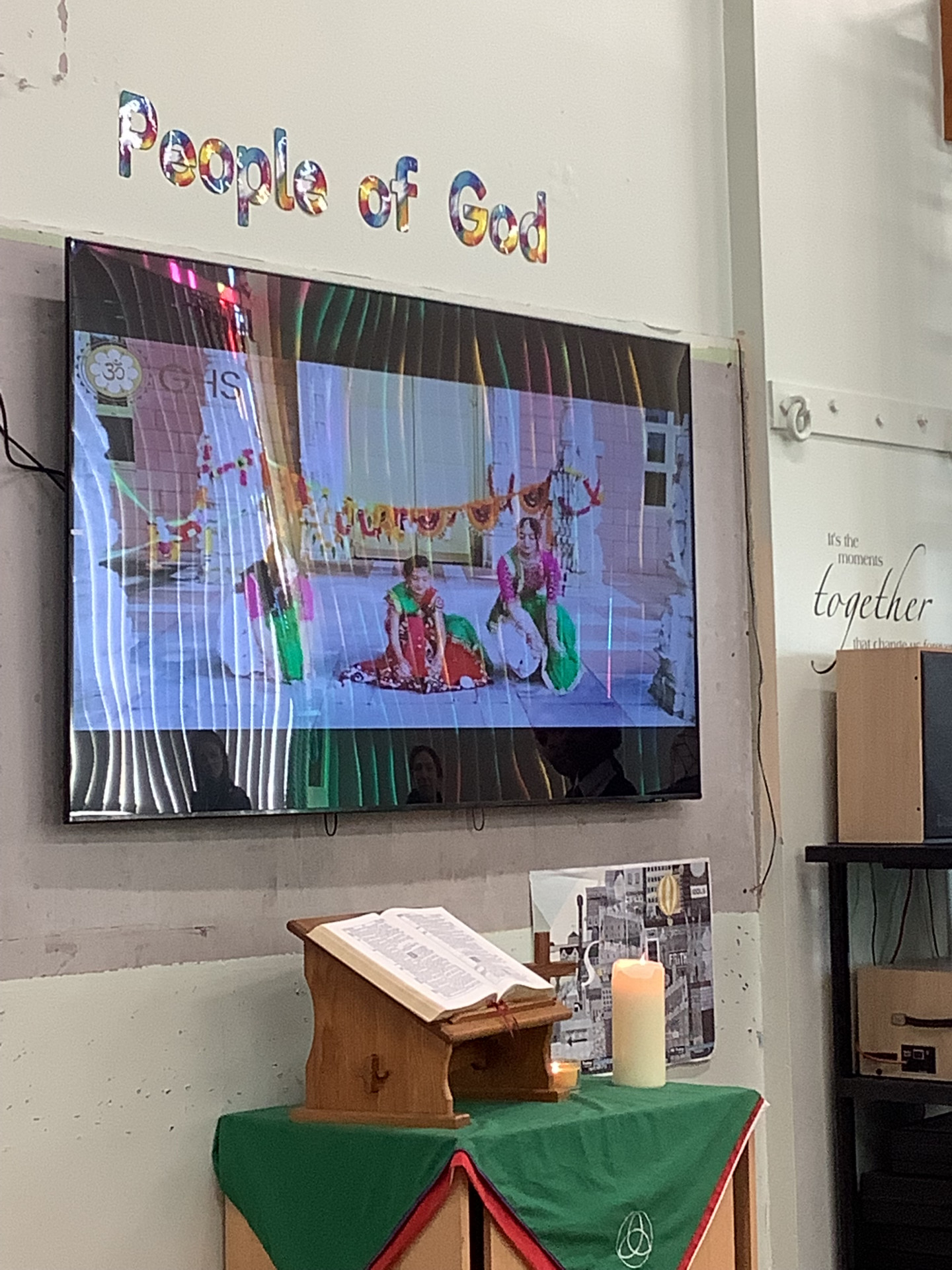 At the end of October, we were honoured to host Bishop Philip North in school. He led worship for us and then moved outside to bless our beautiful mosaic and values murals. Bishop Philip then toured the school to meet the children and answer some of their questions. In EYFS he was treated to a "tea party" in the wendy house before moving all of the way through school. In Year 6 he was asked hard hitting questions such as "If we are all the same in God's eyes, why does even The Church of England have a hierarchy?"

Bishop Philip concluded his visit by leading prayers of remembrance in our outdoor prayer space and remembrance garden with the staff.

After his visit, he sent a lovely email through to school thanking us for our hard work to make the school the wonderful place it is. 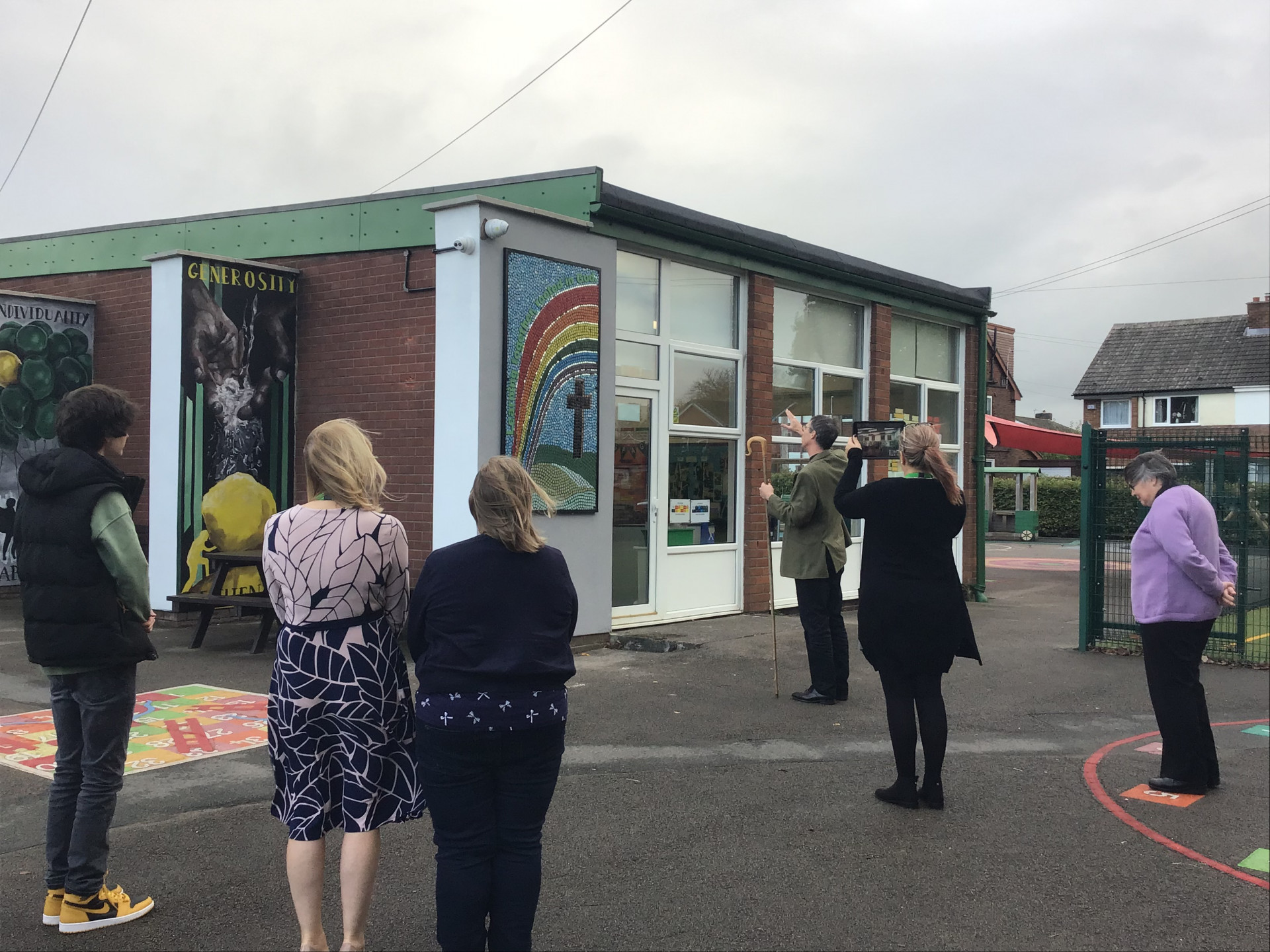 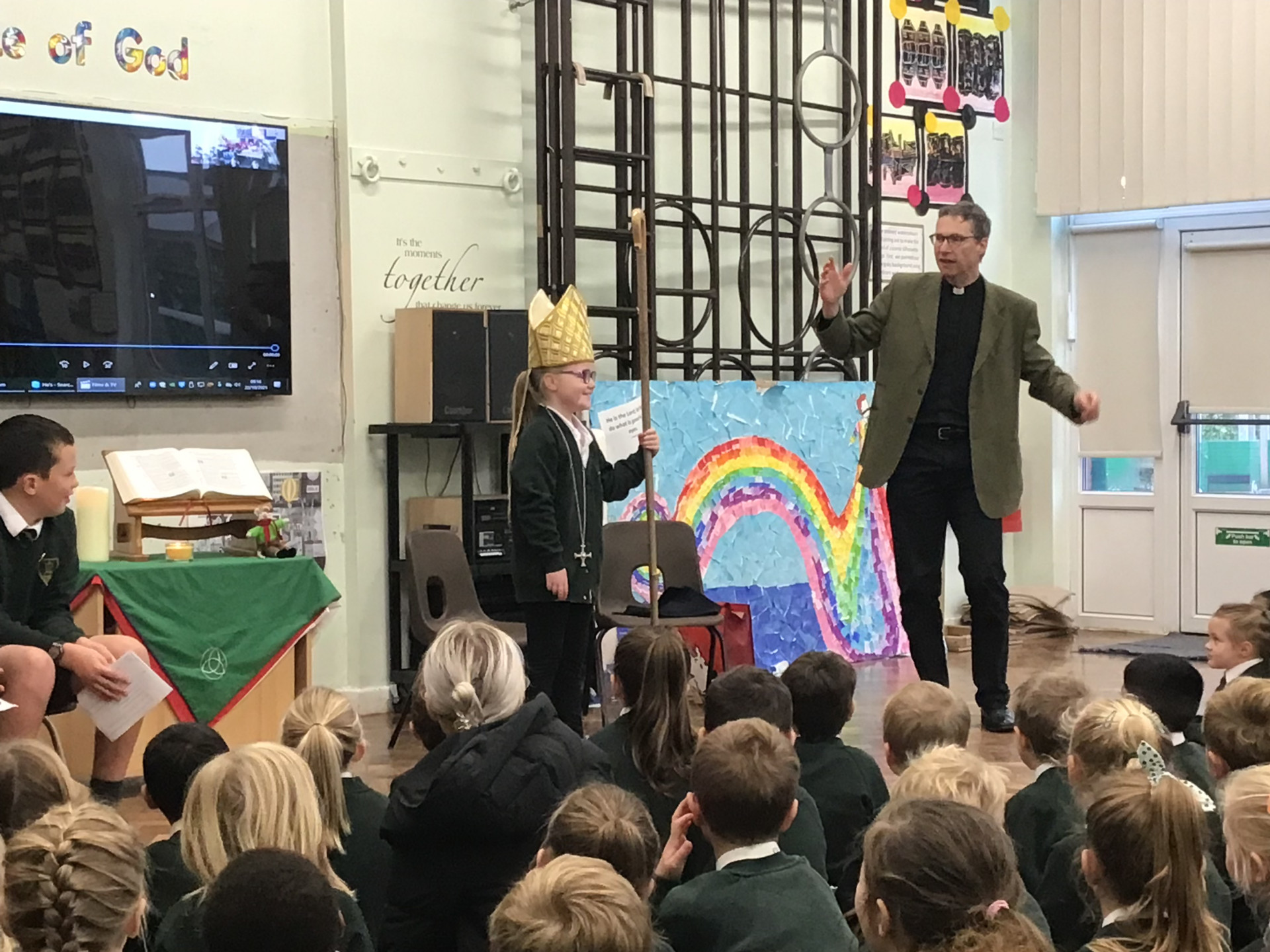 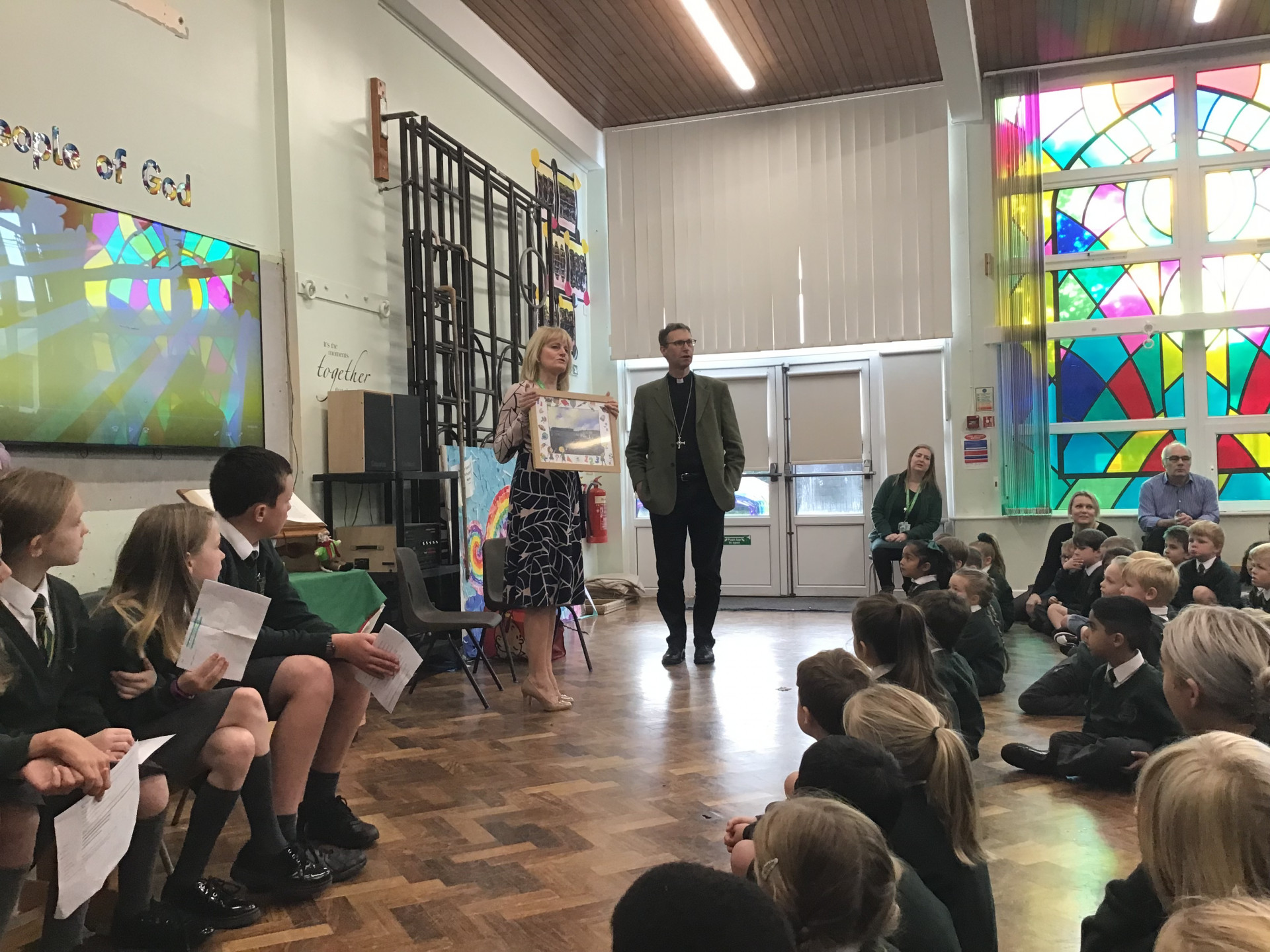 "I have done countless school visits but have rarely enjoyed one quite as much as St Lawrence today. What an extraordinary job you are doing!

The school was visually stunning and such an enlivening and imaginative environment for education. I loved the Year 1 classroom! The Christian ethos is so natural and richly embedded - the Gospel just seems to be the air the children breathe. And the children were an absolute delight. I love it when schools manage to be both an orderly environment and a place where individual character can develop and flourish so that there is safe space for the mischievous and humorous as well as the perfectly behaved! It makes for an environment that educationally purposeful as well as happy.

Thanks SO MUCH for all that you are doing. The schools of this Diocese are absolute jewels, and your is an outstanding example of them."  Bishop Philip North

Our Values in Action

Kindness in action. A big shout out to Louis. Louis was lucky enough to have the first ticket drawn in a raffle and was therefore the proud winner of the monster truck! He was delighted and offered to share it with his brother Alfie. Louis then noticed a little boy aged three across the room absolutely heartbroken and inconsolable because he wanted the monster truck and couldn’t understand why he couldn’t have it. Louis took it completely upon himself to go over to the little boy and give him the monster truck! In return, the little boys mum gave Louis a bottle of wine which she had won in the raffle which Louis then gave to mummy on his return home.

We are all so proud of Louis’ kindness at 6years old. If only more people in our world were like him!

Generosity in Action. Congratulations to Eva  who took it upon herself to generate income for a rainforest charity by running 2k a day during the Christmas holidays, running the equivalent of a marathon overall and raising £150 in the process. Eva's mum said, "She initially had the idea to raise money for beacon fell after we heard there had been some damage there from a storm in December but then went to visit over her holidays and decided it didn’t look too bad so has chosen to donate the money she raised to help plant trees in the rainforests, to help orangutans instead (which I assume was inspired by a trip to the zoo over Christmas).

Either way, she did well - and even got me out on Christmas Day and Boxing Day to get her few kilometres in for those days.

The children all took part in mosaic sessions, in their class bubles, to create this giant mosaic of our school motto. They helped to design the artwork and every tile was placed by a child at the school. "We chose a rainbow as a sign of the hope we have for the future" Joe Yr4

What a wonderful reminder to the children that we are Learning together, rooted in God. 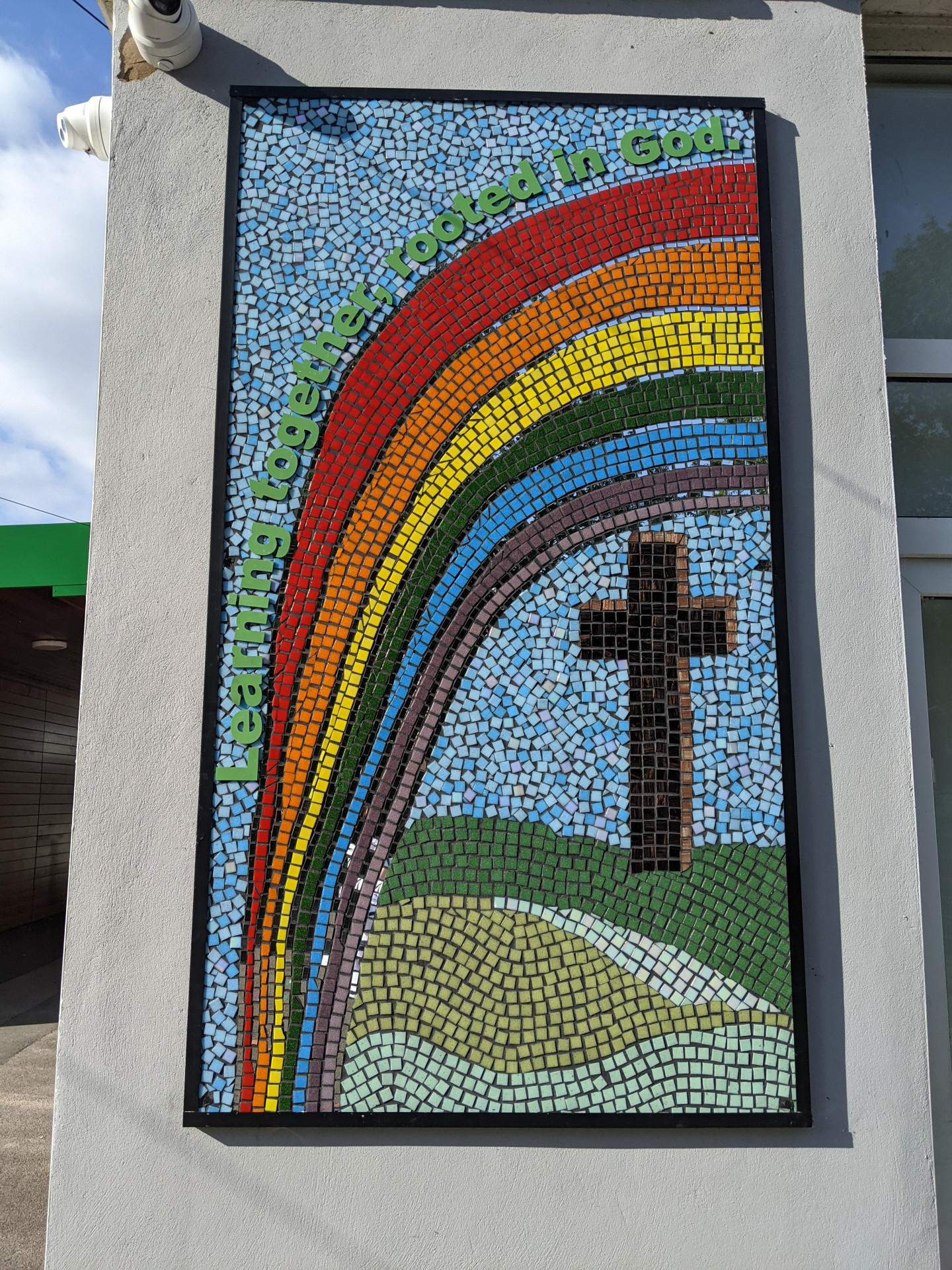 Our school values murals were added to school in Summer 2021 by a very talented ex pupil who took his own understanding of each value and designed images that embody them. As Stanley has grown up discussing, exploring and celebrating these values throughout his primary school life, who better to design the murals for us? He then painted these original designs directly onto the fabric of the building to help us to remember the values we try to show through our actions every day. Thank you Stanley!

At Christmas, members of the community came to school to take the children on a walk through the Nativity story. First we met an excited reporter who had heard there was a very special baby about to be born. With speculation rife as to who this could be, we set off around the school grounds to investigate. We followed a donkey, met some shepherds and then finally found the stable where the baby had been born. While we were there we spoke to the people who came to worship at the baby's crib and met three wise travellers who brought gifts for the baby.

Pupils at St Lawrence Church of England Primary School are easy to distinguish by the personal qualities they present.They are happy, confident, articulate children with a love of learning.